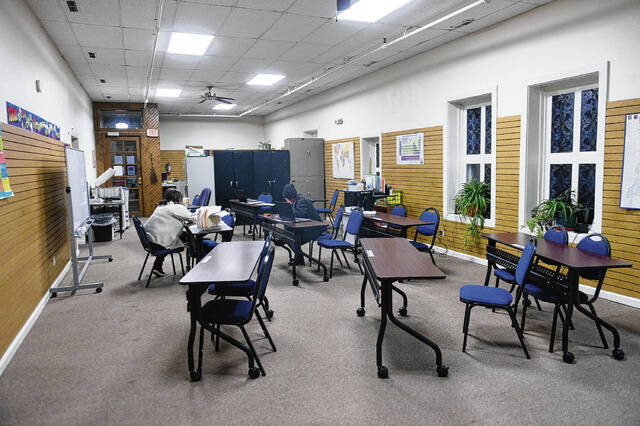 BACK TO SCHOOL: Second-chance learners make up for lost time at learning center

GREENFIELD — Peggy Petty never told her kids she hadn’t earned her high school diploma, or that she had to quit high school when she became pregnant with her firstborn child.

Instead, the 58-year-old Greenfield woman faithfully went to her job as White Castle manager for the past three decades, but the high stress and unpredictable hours took a toll.

In May, she retired from the fast food company after 31 years and went back to school to earn her high school equivalency diploma from the Hancock County Learning Center in Greenfield.

She completed the course on a Thursday, had a job interview the following Monday and started her new job as a factory processor the next day.

The program offers free high school equivalency preparation and career training to people 16 and over.

This month, the learning center moved to a new location at 20 W. South St. in downtown Greenfield, sharing space in the same building with The Landing Place, a gathering space for teens.

The centralized location will make it easier for the learning center to fulfill its mission to serve those in and around Hancock County, said Natalie Reuter, director of Warren’s adult and continuing education department.

“In the last two years, we have provided classes to over 177 Hancock County community members, and over 100 earned their high school equivalency diploma while attending our instructional classes.”

Instructor Rachel Hilligoss thinks the new location will be easier to access than the previous one, which was located in a strip mall off State Street, just north of Davis Road.

“This new location is a lot more centrally located, and I think it will benefit more of our Greenfield population who can walk to class,” she said.

Hilligoss, a longtime educator who has taught middle school, high school and community college, said helping adults earn their HSE degree is possibly the most rewarding job she’s had.

“You can see how it really changes people’s lives,” she said.

“A lot of our students come in because (not having their degree) is something that has been kind of weighing on them for so long. Plus they know they can’t apply for certain jobs or move up the ladder without it. In today’s society it’s just so important to have that high school diploma, for your earning potential down the road.”

Hilligoss cited the example of one recent graduate, a 20-year-old Brownsburg man who had dropped out of high school at 16. He made the 50-minute commute to the Greenfield center for eight weeks to earn his degree this year.

“He’s been working for an electrician, and as soon as he got his high school diploma, he got a $4 an hour raise,” Hilligoss said, but not all benefits are monetary, she added.

For Petty, her new job as a packager at Vivolac Cultures in Greenfield pays about the same and takes the same amount of time — roughly 45 hours per week — but it’s been much less stressful, she said.

She works regular eight-hour shifts, Monday through Friday, with no bouncing around to different locations as she did in her previous job.

She also gets paid holidays and other benefits.

One of the best parts of the change is that she’s not exhausted any more.

“When you work third shift one week, then first or second the next, back and forth, it really wears you out,” she said.

“I’m much happier now. It’s easy. I feel like I have time for me now,” she added.

Petty said the Learning Center did a tremendous job of helping her earn her degree.

“I think they did an excellent job. Even though I was in with younger people, the staff made me feel comfortable. They were always giving me comments to build me up, so I knew I could do this,” she said.

It took Petty eight weeks to complete the required course, but Hilligoss said the amount of time it takes varies by student.

“You really never know how long it will take somebody until they take the assessment test,” she said.

Hilligoss said the reasons her students never earned their high school degree are as varied as the students themselves.

“For some people school wasn’t really that hard for them, it was more of the social aspect of school that bothered them. Some struggled academically, but some are just bored and don’t want to be there all day,” she said.

For others, like Petty, life circumstances led them to leaving school prior to graduation.

Today, the recent graduate encourages others in her same situation to go back to earn their high school equivalency degree.

“Go back and do it, at least for yourself,” she said, “because you’ll regret it if you don’t.”

Petty said earning her degree was always on her personal bucket list of things she wanted to accomplish.

“I was starting to get my GED when my kids were little, but you don’t have time when your kids are little, especially when you’re working swing shifts,” said Petty, who would have graduated from Anderson High School in 1982.

What did her kids have to say, when Petty finally earned her degree this past September?

“They said they were proud of me. It felt wonderful,” she said.